Last year at ISECON,  I gave a workshop about teaching Big Data to introductory IT students. Here’s an updated and slightly simplified version of the exercise we did in that workshop, modified for a class I taught last summer. Download the exercise.

This year, my paper summarized the lesson presented to students and shared student impressions of the importance of learning about Big Data.


Introducing Big Data in the Digital Literacy Curriculum from checkmark

Next week, Bentley is holding a research colloquium where I am sharing similar ideas about ways to introduce Big Data topics to introductory students. Here’s my poster. 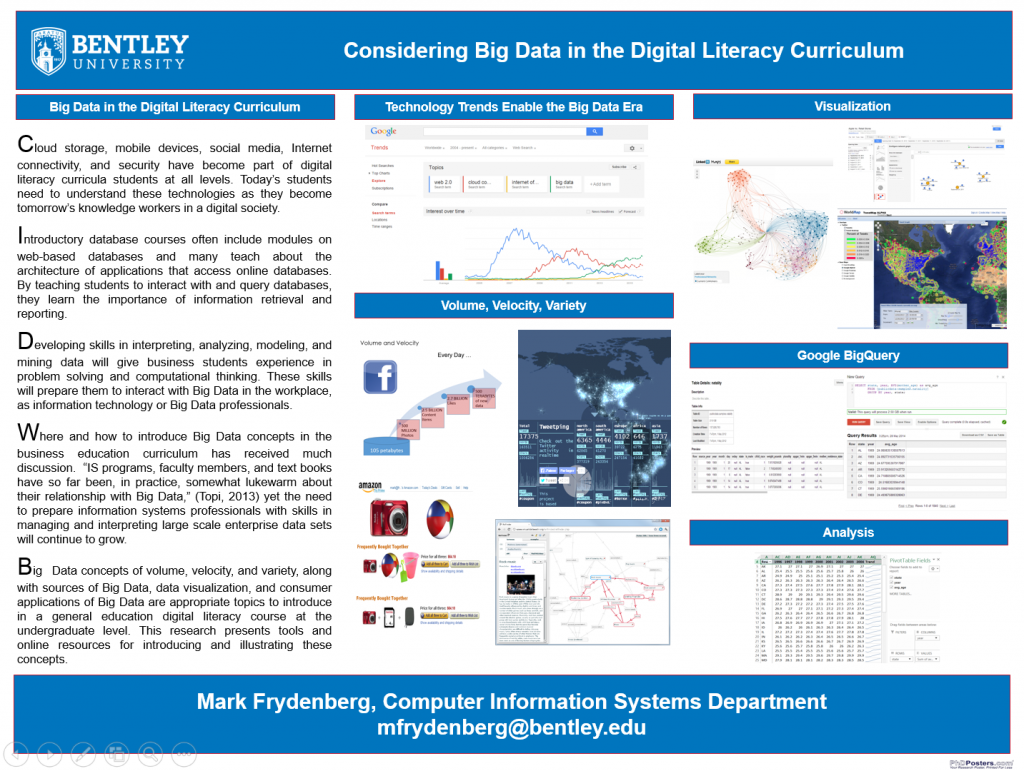 Ten years ago, the Bentley Vanguard reported that I started teaching a new class where students bought Pocket PCs instead of textbooks. There were no iPhones or iPads. Today, nearly every student owns a mobile device, and I am an author of their textbook. Who would have predicted?

10 yrs ago, my students used PocketPCs instead of textbooks. Today most have smartphones & I authored their textbook. pic.twitter.com/ZtQlSB9jfU

Gordon Hardy asked me to write a post for the Bentley IMPACT blog on unexpected things that have happened in the CIS Sandbox since we opened two years ago. It’s up on IMPACT now.

We have been able to reach students whose minds often are tuned into iPads and iPhones: A collaborative working space integrated with a social media presence promotes informal learning about technology. Companies and students shape activities and services beyond tutoring in an age where BYOD requires us to offer more than just access.  This is a new paradigm for engaging students in IT learning.

I presented Drinking from the Fire Hose: Tools for Analyzing and Teaching Big Data at the Cengage Conference today.

My presentation is below, and thanks to Ryan Norris who shared his slides with me from his presentation at the CIS Sandbox a few weeks ago. I would have never thought to begin a talk on Big Data by talking about Kevin Bacon.

I was interviewed tonight for five minutes on the radio about the flipped classroom.

Last night I received an email from Todd Smoot, Executive Producer of News and Programming at KCBS Radio 740 in San Francisco. He wrote:

Hi Professor Frydenberg… We saw the article in the Sacramento Bee about the increasing practices of “flipping” in education. We were wondering if you might have a few minutes tomorrow for a brief telephone interview about “flipping” … What it is? How it works? Why it might be a better method of teaching? The interview would be live on the phone with our anchors and last about 5 minutes. The best times for us are 5:20p, 7:30p or 9:30p (all times Eastern).

I sent them my phone number and asked to be on the 9:30 pm broadcast.  At 9:30 pm, the phone rang. A producer  told me the anchors’ names,  Jeff  Bell and Patti Reising.   60 seconds later I was on talking with them on the radio.   5 minutes and 4 seconds they brought the conversation to a close.  The producer thanked me, and I hung up the phone.  A few minutes later,  they sent me an email message with the audio file.

Their questions… why flip? how can you tell if students watched the videos? what about the digital divide?  Listen in and see what I had to say.

Thanks to KCBS News Radio for the recording, and for permission to share it.

Diana Lambert of the Sacramento Bee contacted me last week because she was writing an article about the flipped classroom phenomenon.  She saw my paper that I presented at ISECON  in November about Flipping Excel, and wanted to know more.    Her article ran in the Sacramento Bee yesterday.

Todd Smoot from KCBS Radio in San Francisco saw the article and invited me to talk with their news anchors about this topic on the radio tomorrow evening, Feb. 20, at 9:30 pm EST. You can listen in at http://cbssf.com . 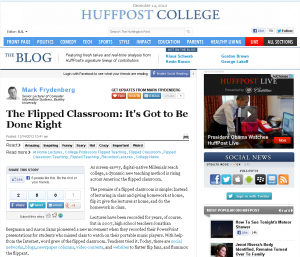 The post on the Flipped Classroom that I wrote earlier this week for Bentley’s Impact blog was published today by The Huffington Post.

(Note:  My screenshot is adapted to show a bigger HuffPost banner and cropped from the Huffington Post page.)

I remember a conversation with my former college calculus teacher, Ray McGivney, when he visited at Bentley last year, and said “I’m teaching in a classroom with tables.”  Who knew one conversation would get me hooked? Thanks, pal.

My application was for the innovative teaching and learning that happens in the CIS Sandbox. It was an unconventional application: Usually these awards are associated with specific courses, and usually the teachers of those courses are actually teaching. In my case, not this time.

The innovative teachers and dedicated learners who made this recognition possible are the CIS Sandbox assistants and students who have embraced the changes we have made, and turned the CIS Sandbox into a place where students gather to teach, talk, tutor, touch, and try technology.

This is my 4th innovation in teaching award at Bentley. I received one in 1999 with Wendy Lucas for a web application we implemented to create personalized course pages that let students check grades online (before the days of Blackboard), in 2005 for introducing Pocket PC’s to IT101, and 2006 for introducing student-created podcasts to the curriculum as a learning tool.

A summary of this year’s application follows the jump.
END_OF_DOCUMENT_TOKEN_TO_BE_REPLACED

I have been teaching using the “flipped classroom” model in some of my classes at Bentley, and wrote a preliminary paper about the experience which I presented at ISECON 2012 in New Orleans.  The paper received a Meritorious Writing Award .

Bentley’s IMPACT: The Power of Ideas blog, published an essay I wrote about the Flipped Classroom today. Have a read.

The first time I offered a flipped classroom activity, I asked students what they thought of the experience. One student said, “I finished the project. I learned more about Excel than I ever have in my life. To be honest, I hated it … but it sure beat a lecture.”

I’m giving a webinar today about the Coursemate update to my Web 2.0 Concepts and Applications text. Here are the slides.

Learn about the latest technologies and trends that will help students be optimally productive in today’s digital world. Topics include the mobile Web, blogging features, QR codes, big data, Google+, Twitter, RDF and the semantic Web, and cloud computing services. Join us as Mark Frydenberg, author of the new text Web 2.0 Concepts and Applications, shares information about how Web 2.0 has evolved and its impact on the digital literacy skills that today’s students need.