I presented at a Symposium on Innovative Social Learning Spaces at the EdMedia conference in Finland last week. The topic was creating the CIS Sandbox and CIS Studio at Bentley. Here are my slides.

Student Learning in the CIS Studio from checkmark

Matt Somma, a CIS Sandbox tutor from the very beginning, graduated last month from Bentley. His article about working in the CIS Sandbox was published in Campus Technology Magazine.

Gordon Hardy asked me to write a post for the Bentley IMPACT blog on unexpected things that have happened in the CIS Sandbox since we opened two years ago. It’s up on IMPACT now.

We have been able to reach students whose minds often are tuned into iPads and iPhones: A collaborative working space integrated with a social media presence promotes informal learning about technology. Companies and students shape activities and services beyond tutoring in an age where BYOD requires us to offer more than just access.  This is a new paradigm for engaging students in IT learning.

EdTech magazine published  my article about the making of the CIS Sandbox, and things we considered as we transformed an eleven year-old space into a campus destination for computing. Read it online.

Update: Thanks to EdTech for a framed copy of the article that’s now hanging in the CIS Sandbox. 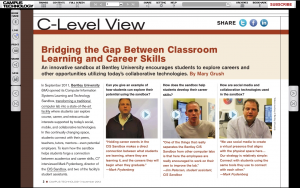 Campus Technology Magazine profiled the CIS Sandbox in the November 2012 issue with video interviews about how the CIS Sandbox uses collaborative technologies to encourage students to explore careers and other opportunities.

More videos after the jump.

END_OF_DOCUMENT_TOKEN_TO_BE_REPLACED

My conference presentation at IFIP-OST 2012.

Aligning Open, Physical, and Virtual Learning Spaces in the CIS Sandbox from checkmark.

The photo shoot was scheduled just before Thanksgiving, so it was quiet in the Sandbox that day, as many students had already made plans to go home for the holiday. We mustered up a few students to help out with the photo shoot.
A few photos of how this shot was captured, and a video tour of the
CIS Sandbox featuring Matt Somma and Dylan Sumiskum, after the jump.

END_OF_DOCUMENT_TOKEN_TO_BE_REPLACED

We had an open house last week in the CIS Sandbox. Lots of people came by to check out the space, and the demos that our students were offering, sharing their special projects at work or in their CIS courses. Here are some photos from the event.

A map of student demos after the jump.
END_OF_DOCUMENT_TOKEN_TO_BE_REPLACED 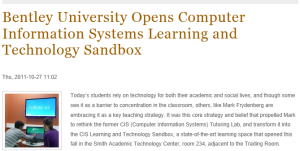 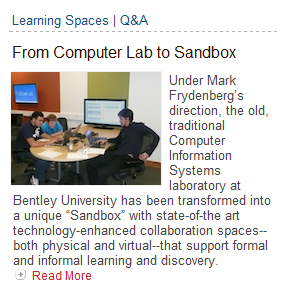 The Bentley Newsroom wrote a short article published todayannouncing to the campus community that we’re open.

Campus Technology interviewed me about the technology, online, and collaborative aspects of the Sandbox in an interview that appeared on Nov. 2, 2011.

Lots going on that students are doing in the Sandbox these days. In addition to helping students with their classes, we’re offering a workshop with Microsoft on xbox development, and one next week on phone development. There’s a logo contest (the winner gets an ipod) and lots of other good information!